The Perils of Little League and Hearing Loss

I need to document this day in writing. So I’ll have a blog post to refer back to. In case I ever EVER say “jeez this baseball mom sitting near me is loud and obnoxious,” hopefully one of you loyal friends/readers/other baseball parents will be quick to remark “surely, she’s not as annoying as that Warner Robins Wrecker mom with the stomping feet and blood-curdling Apache warrior scream that caused semi-permanent hearing loss to those around her.” Yes. I need to remember this day. No doubt, the hearing aid I’ll be fitted with next week will be a constant reminder.

I’m here now. In Gray, at a tournament for our Tornadoes Team. Ear Splitting Sandy is sitting 15 feet away from me, shrieking her lungs out with every hit, run, error, walk up to the plate and breath that her players take. If someone were able to hear only her and no ambiance, they’d think she’s auditioning for the lead role in a horror film.
Rather than tell her how obnoxious she’s being to the rest of the world, I’ll simply channel my nervous anger in writing….and later send her the bills from our audiologist. Plus, she’s bigger than me, the kind of gal, who, when approached, would probably bellow “what’d you say to me?” Of course, that might just be because she’s deaf.
I know I’m not the perfect baseball mom, but here’s a thought to live by. If your cheering is so loud and urgent sounding that it causes others to look around frantically to see who just got run over by a truck or was mauled by a tiger, then you should probably tone it down a notch or ten.
I have a feeling that her son is the one on second base, 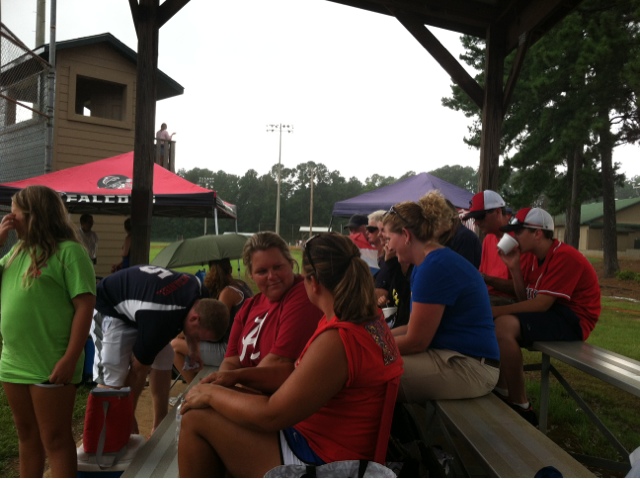 with the nervous eye-twitch. Oh no, it also looks like he may have just wet his pants during that last out.

The mom I’m referring to may be in this photo, but I’ll NEVER say which one.

2 Responses to The Perils of Little League and Hearing Loss