Suffering from "Low T" and other daily maintenance problems

Posted on May 2, 2014 by angelaweight
One of the things I really hate about my husband James living two states away is when a situation arises that I’m not equipped to handle on my own. Like anything to do with my vehicle other than driving it and putting gas in it. 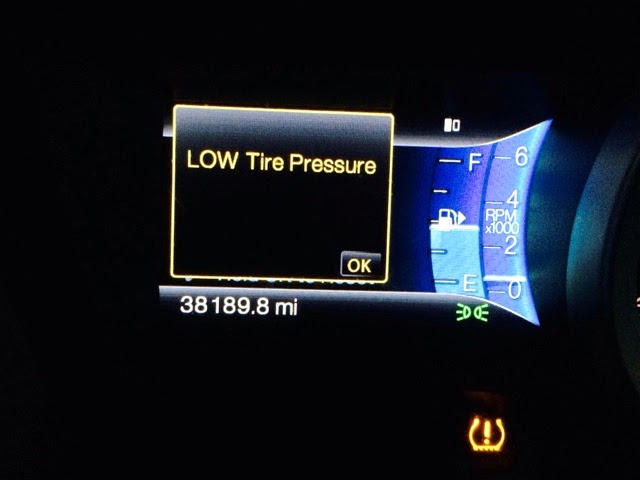 This morning, our quiet commute to school was interrupted by a loud beep followed by a dashboard message announcing “LOW tire pressure.” It even had a big yellow light exclamation point. I swear cars can be so dramatic. Seriously. Does Ford employ teenage girls to design their dashboard communications? I’m just waiting for the low fuel light to be accompanied by “O.M.G.” and a frowny emoticon.
The overly dramatic alert reminds me of my car’s angry, passive-aggressive GPS navigator, whom I call Gretchen. I really don’t appreciate her exaggerated “you’re such an idiot” sigh before she barks “RECALCULATING.” One day, maybe she’ll open up to me about her crumbling marriage or how she feels like a failure, setting aside her dreams of Broadway for a GPS navigation job. Then I’d be much more forgiving of her nasty attitude. But I digress.
So, back to my tire pressure debacle.
ME: “Apparently I have low tire pressure.”
JACK: “Is that the ‘Low T’ they talk about in those commercials?”
ME: “Sort of. But that’s low testosterone. It’s like tire pressure in men.”
JACK: “Does Dad have low tire pressure, I mean testosterone?
ME: “I’m quite sure he doesn’t. But just to be on the safe side, you should ask him. Make sure lots of people are around when you do. It would make an interesting group discussion.”
JACK: “Okay. I’m gonna ask my baseball coach too.”
After examining all four tires and finding them full of what I can only assume is air, I wanted to ignore the warning light and go on my merry way, but alas, the exclamation point continued its blinking girl drama. What to do?
Option One: Most people would drive to one of those gas station tire filler upper hoses. But after the “Tire Air Incident of ’99,” I’m afraid of those things.
Not long after I moved to California as an oblivious young single gal, someone pointed out that one of my tires needed air. Men, especially, love to point out things like this. I think it’s a gene that they’re born with, the same gene that gives them the unavoidable compulsion to direct people into and out of parallel parking spaces.
Nearly every time I go to parallel park, a random guy will materialize out of thin air to make exaggerated “go back, pull forward” hand gestures. It’s like no matter what he was in the middle of doing, when his “someone is parallel parking” sensor goes off, well, by gosh, he’s gotta direct them!
So, back to the tire pressure machine story, I deposited my four quarters, took the cap off my tire valve and attached the air hose. Three seconds later, my tire was flatter than a breast during mammography. Frustrated and personally deflated, I just stood there staring at it while an angry Asian woman, waiting for me to finish, started honking her horn. I shrugged with embarrassment as her honking turned to violent hand gestures. Finally, she jumped out of her car, grabbed the hose and refilled my tire herself, while sputtering Vietnamese curse words…or menu items from the Saigon Palace. It was hard to tell.
Since tire air machines don’t employ attendants or helpful Vietnamese women, I can’t risk accidentally deflating my tire again. 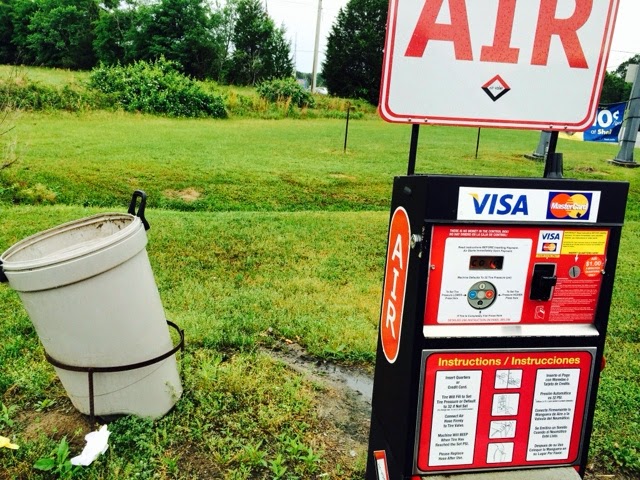 Option Two: I could go to Double N Tire Center (James’ preferred dealer) and have them look at it. But, MY GOSH! Have you been in that place? Their hiring criteria is as follows:
-Everyday appearance frightening enough to make small children cry
-A minimum of 24 large tattoos featuring themes of death, misery, torture and zombies. Tattoos featuring Calvin and Hobbes urinating on a Ford logo are permitted but not required.
-Must communicate using only abrupt grunts, barks and hand gestures. Intelligible words are strictly prohibited. The right candidate will also demonstrate an aggressive, threatening and unpredictable attitude.
-Extensive prison record with incarceration at both local and state levels. Parole violators are encouraged to apply.
-NO evidence of personal hygiene as indicated by stench of week old perspiration, inch long black fingernails, blackened teeth, if any, and beard lice. Those with chronic spitting habits are encouraged to apply.
The only time I ever went there, I thought I’d walked in on a live reenactment of Michael Jackson’s Thriller video.Yes, there are other tire dealers in town, but ironically, James doesn’t trust them.
Option Three: I could go to Jiffy Lube and ask them to check my tire pressure. That one guy, Dustin, seemed helpful. But they do oil. Not tires. I’m afraid, he’d explain to me in a voice reserved for brain damaged people that I needed to go to an air machine or Double N Tires, right down the street. Then I’d feel even stupider than I do right now. Is stupider a word?
So, instead of solving the dilemma, I decided to come home and blog about it. If you see me later, going through the school pickup line on foot, you’ll know that I never made it to Option Four.