Posted on June 8, 2014 by angelaweight
Day Two: This place is breathtakingly gorgeous in an unspoiled, barren, Marlboro Man, coyote/roadrunner* sort of way.
This morning, all 50-something of us travelled to Red Rock State Park to worship, meditate and hike.
Aside from being overwhelmed by the canyons’ splendor, I was impressed by what a perfect location it would be to dump a body or a hide a geocache or play tag. 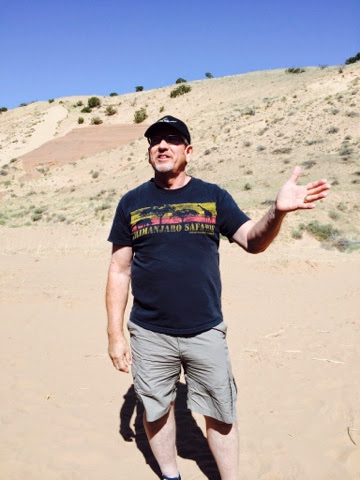 Brother Billy’s sermon on the mount 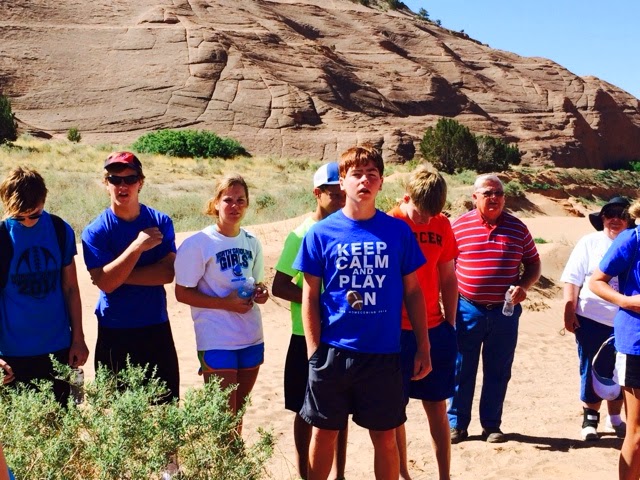 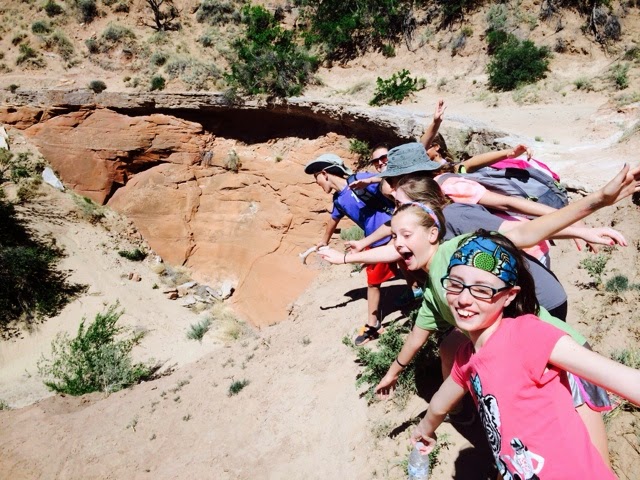 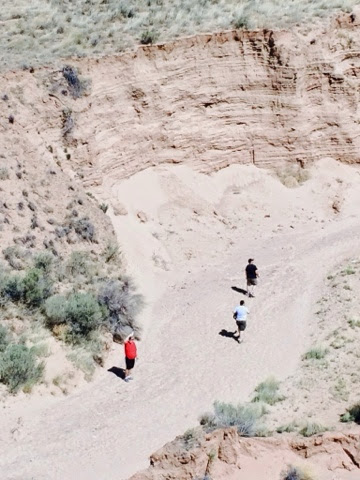 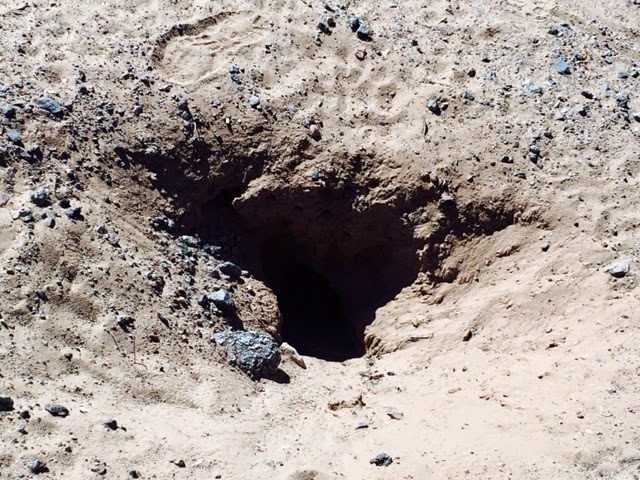 One of a thousand prairie dog holes. It gave me sympathy for Bil Murray’s character in Caddyshack. 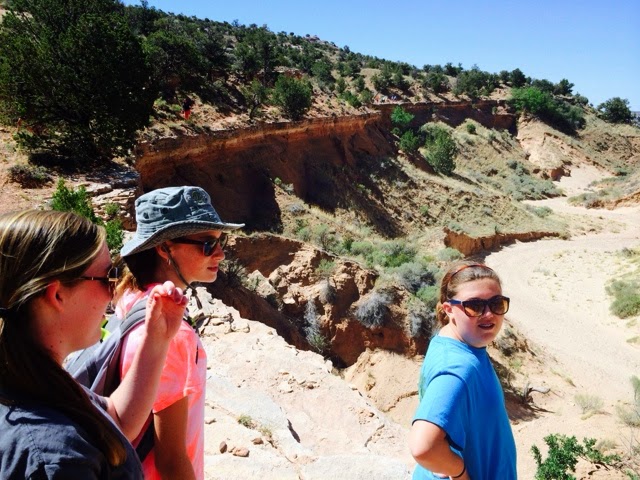 This would be a terrible place to have a seizure or a “push me” sign unknowingly taped to your back. 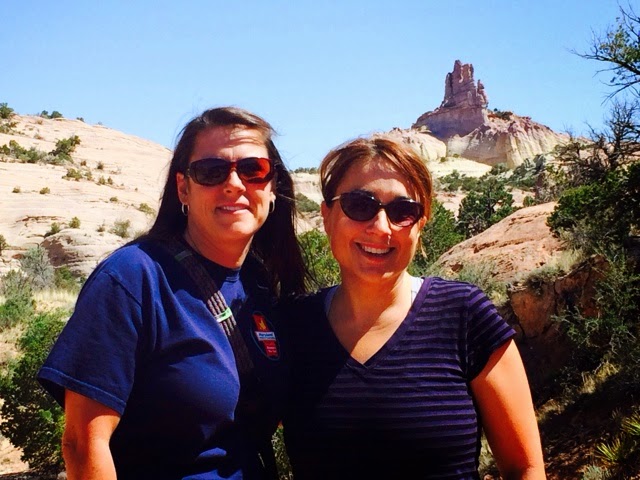 Annie and me in front of “Church Rock.”

No one knew for sure why it’s called that, but it made me think of the three crosses at Calvary. 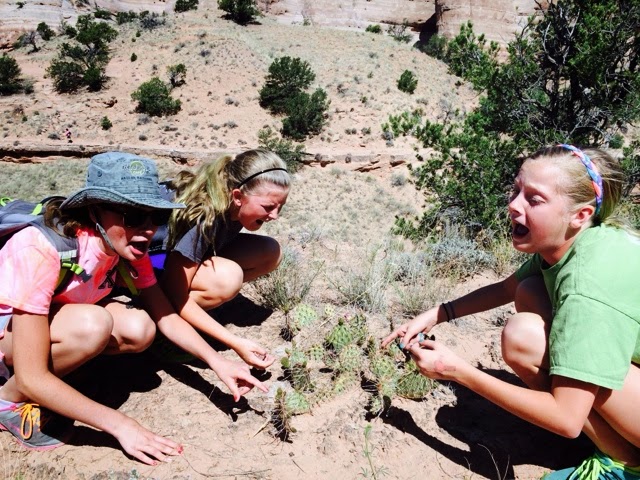 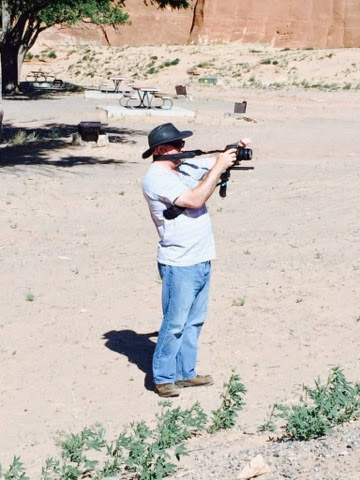 The man in the black hat. I feel like Curious George always calling him that. I’ll set a goal to learn his name tomorrow.

11:39 a.m.
Even though it seems like we just started our hike, they’re already trying to herd us back to the vans. Apparently it’s time to go to Gallup, to the El Rancho Hotel, a local landmark where John Wayne and his friends used to hang out and shoot stuff.
The older people are excited to go there.  Brother Billy has unknowingly picked up “The Duke’s” famous twang, the same way you involuntarily start calling others “mate” after speaking with an Australian telemarketer. And Miss Kay is now walking like a cowgirl, I notice.
The teens, comparatively, are unimpressed, miffed that our outdoor adventure has been cut short.
Cammi: “Who IS John Wayne anyway?”
David: “I think he’s like Mr. Clint’s** cousin or something and he, like, needs us to bring him money or something.” 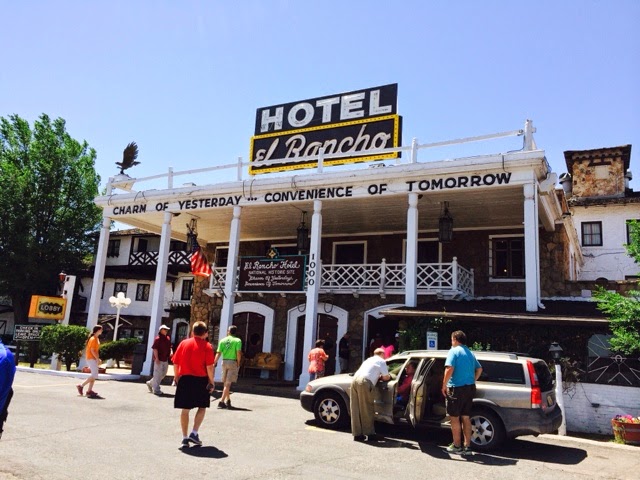 2:14 p.m.
I’ve been stuck in the back of a van with six teenage girls for the past two hours. They’re hogging the AC vents and taking duck-lipped selfies.*** I know you think I’m making it up for dramatic effect, but they really are. They shriek and laugh with each pose, while I sit here feeling cranky and old and unfun, wishing they had a mute button. I think it must be the same way James feels when I’m around.
I’ll write more later.
* I’d pay good money to watch Wile E. Coyote slowly and decadently devour that stupid bird.
** Have you ever seen Clint Crozier sing and dance to the Zaccheus song? He should be on America’s Got Talent.
***I thought duck faces went out in 2012.