Heading Home. Gosh, I’ve a Learned So Much

Posted on June 14, 2014 by angelaweight
As much as I’d planned on posting everyday, we got so much busier as the week progressed. Plus, pecking on my cellphone using one thumb, while bumping along the Navajos’ pothole ridden asphalt isn’t terribly easy.
Excuses aside, we’re now back in our vans, packed like sardines, heading down I-40 toward the Albuquerque airport with Georgia on our minds.
Here’s a list of things I’ve learned, whimsical observations and prayer requests I’ll take back home along with a few chintzy souvenirs.
1) Tumbleweeds aren’t just in old western movies. They’re real…and can be huge. And they roll down the streets and fields, propelled by the constant winds. Step aside or you may find yourself a dizzy captive inside one. 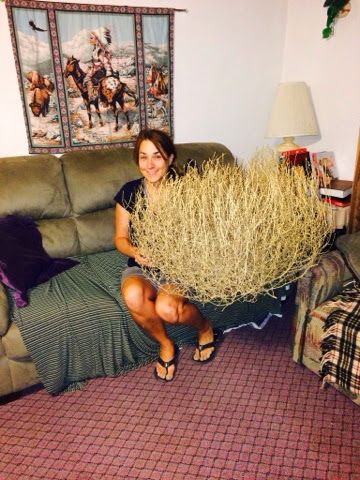 Here’s a tumbleweed I adopted and named Tom. He’s coming back to GA on the DBC trailer. You may be able to visit him at NWLE in Kristy Shepard’s classroom. 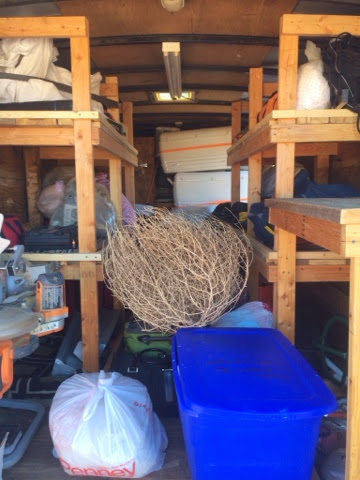 2) Those jutting, red, flat-topped landforms you see in all the Coyote Roadrunner cartoons and all over the Southwest… Well, they aren’t simply mountains. The tallest ones are plateaus. The medium-sized are mesas and the smallest are called buttes. I’m no expert at identifying them. But it reminds me of The Three Bears.

Check out the Jabba the Hutt looking butte. Also reminds me of the Angry Birds pigs. 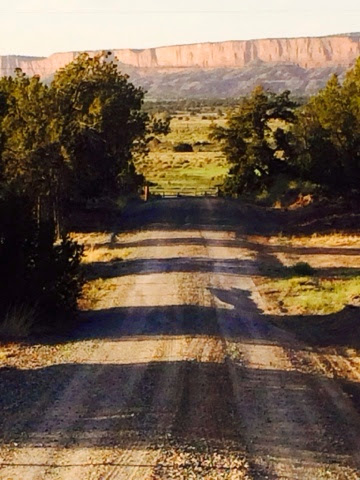 3) While rain is a rare commodity in these parts, the wind never stops blowing, assaulting everything in its path. Sometimes it’s just a light breeze, but other times, cover your eyes and take shelter. And keep your Chapstick handy. 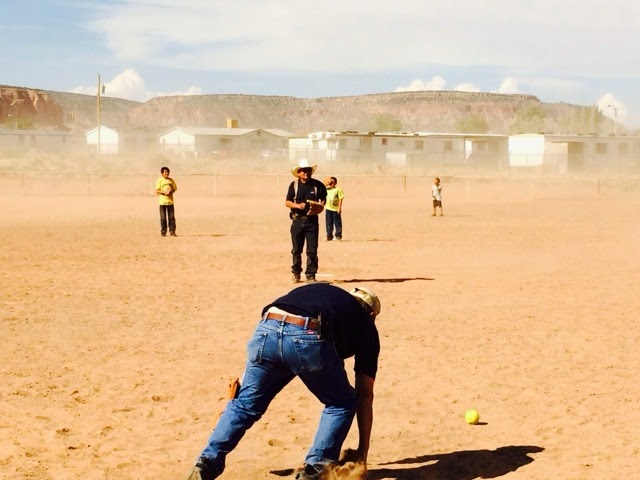 Check out this photo of yesterday’s baseball game. That’s not a dirty camera lens. It’s the crazy New Mexico wind. Locals just learn to ignore it.

4) The Navajo Indians live in some of the most unfathomable poverty I’ve ever seen. Many dwell in octagonal, one-roomed structures called hogans. And they use outhouses. The roughshod, dirt yarded single-wide trailers, where lots of families live, are a luxurious upgrade because they have electricity and running water.
We held VBS in what you’d basically consider a junkyard. But Miss Anna, its owner, was so thrilled to offer a venue where children would learn the word of God. And the kids didn’t care. They were happy to have somewhere to go. 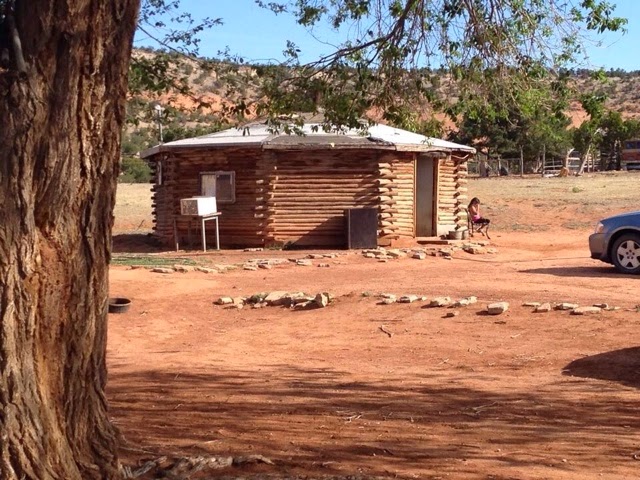 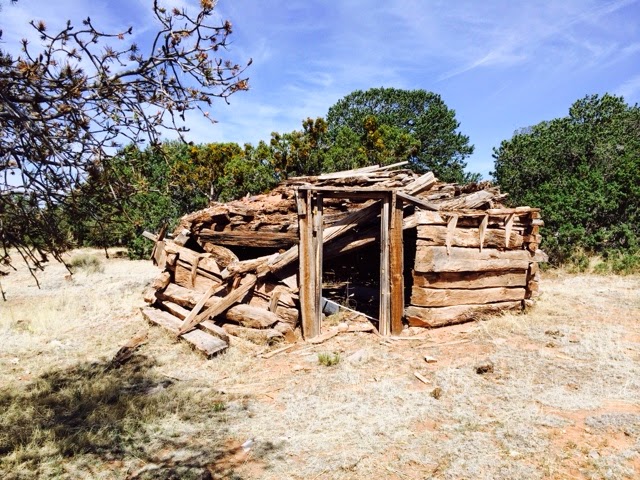 Here is the hogan that Miss Anna and all her siblings grew up in. Last winter, the roof finally caved in. 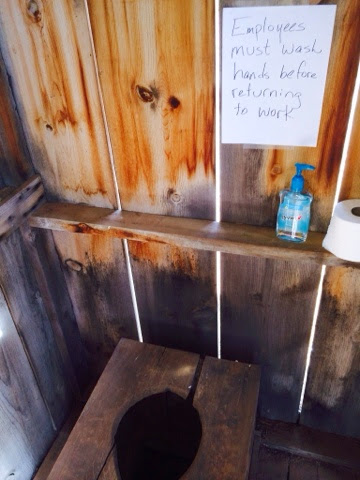 I was in charge of setting up the outhouse for VBS. I tried to give it a commercial appeal with toilet paper, instead of corn cobs. 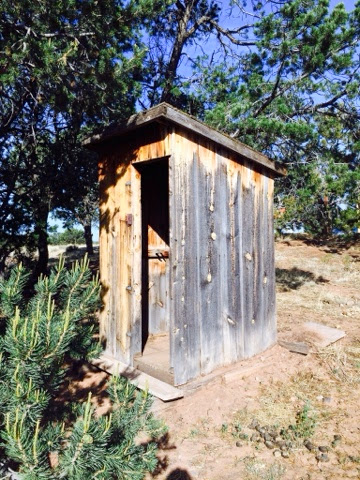 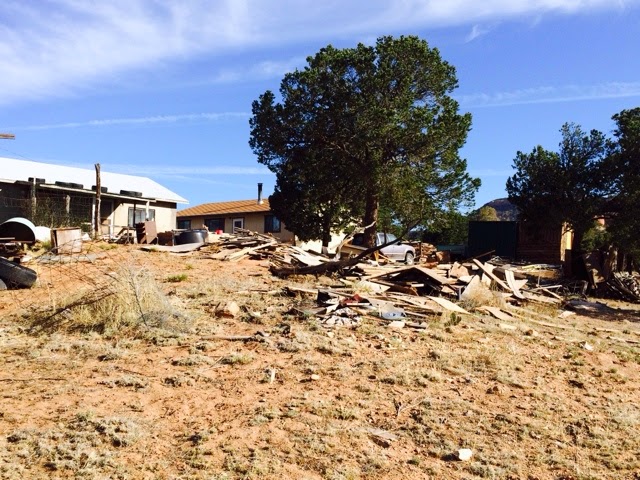 5) Water is unimageanably scarce. Don’t flush the toilet with every bathroom visit. Don’t wash clothes unless the only option is public nudity. Water your grass? Yeah, right! No one has grass, unless you count the spiky sagebrush that sprouts at will. Most yards are just red dirt.
6) Majestic wild horses run all over the reservation. You really have to watch for them when driving. 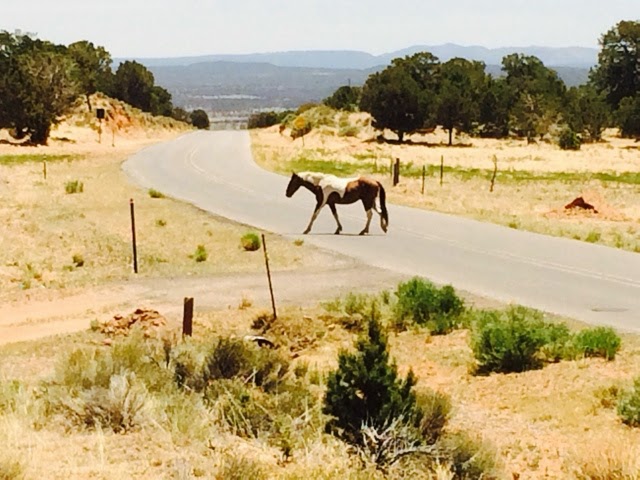 7) While Denver, CO is known as the “mile high city,” the Continental Divide area between Gallup and Grants (just down the road from our mission) is the highest elevation in the continental U.S. Locals take pride in being “on top of the world.” 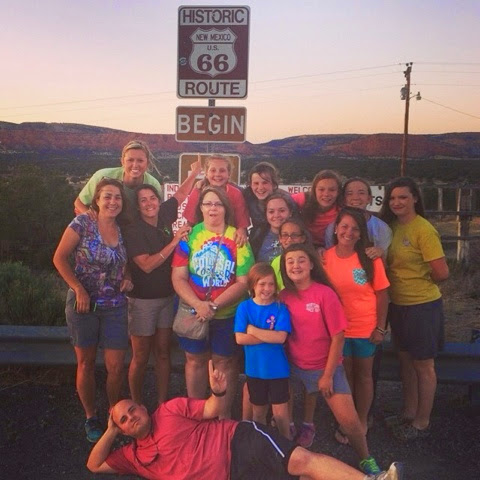 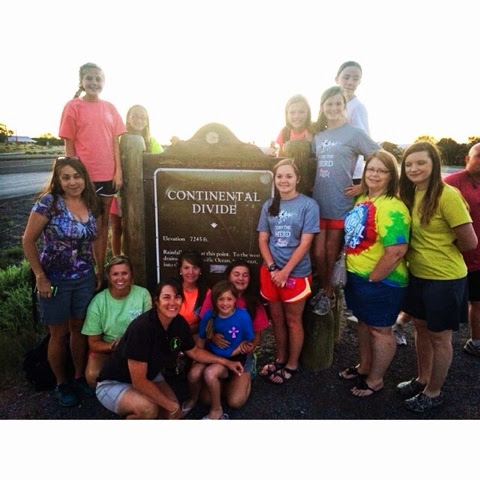 8) The Navajo reservation reaches into four states. Aside from the postcard scenery, this area is the most barren, empty, depressing place I’ve ever experienced. The Indians, have no sense of personal empowerment, choosing to depend on meager government scraps rather than doing for themselves. Their rates of alcoholism and teen suicides are the highest in the U.S. They need our prayers, education and opportunities, not our handouts.
Hey! We’re in Albuquerque! The ride goes a lot faster when you’re thumb typing. As always, thanks for reading my posts and allowing me to share this adventure with you.

6 Responses to Heading Home. Gosh, I’ve a Learned So Much