Posted on July 6, 2014 by angelaweight
I’ve stopped counting days since our move to Richmond (or Midlothian, which, mind you, is an area, not a town).* We’re still “random strangers trying to meet people” as Jack said yesterday. But things are getting better. Here are some of the reasons.
1) I think we may have found a church. Parkway Baptist was good. My only complaint was that the worship leader guy was wearing really dark denim jeans and white rubber flip flops, making him look as if his Sunday morning pedicure had run a little overtime and his toenails weren’t dry yet.
I had trouble focusing on the sermon because I was preoccupied with a woman across from us who was orally assaulting a pack-and-a-half of Hubba Bubba bubble gum. Otherwise, we loved the place.
Have you ever noticed how some people chew gum with their whole faces? Like, even their eyes seem to open and shut as their jaws move up and down like a steel car crusher. Makes my mouth hurt just watching them.
I used to work with a hospice nurse who was the most violent gum chewer I’ve ever known. If there was a Tommy John surgery for gum chewers, I’m sure she’d have needed it by now.
Her name was Nicole. I guess it still is, unless she’s in the Witness Protection Program or something. (Suddenly I’m too lazy to change names.)
Speaking of the Witness Protection Program (now that’s a conversation segue you almost never hear), since we’re still painfully new to the area, I thought it would be fun to have t-shirts screen printed that said Witness Protection Program. We’d wear them to the pool, to walk the dogs and to school registration. If anyone asked, we’d tell them we couldn’t discuss it.
(I’ve lost my train of thought. Where was this post going? Oh well.)
I don’t understand why people are so in love with Greek yogurt. It tastes like sour cream mixed with caulk.  I guess you’re supposed to mix it with other, tastier stuff. But I think there are too many food items that taste bad until you mix something with them. Why not just eat the mix in?
Just think of rice cakes. Whoever invented them had to be laughing at the gullibility of people willing to eat styrofoam packing material.
(Fictional conversation)
“It tastes like styrofoam!”
“Yeah, that’s why you put yogurt on top.”
“Greek yogurt?”
“Yes, but only if it has strawberry jam mixed in.”
“Why not just eat the jam?”
I mean, heck, why don’t we start spreading jam on all these cardboard moving boxes lying around? I could cut our food bill in half. Forget couponing.
(Oh, right. I was naming things that make us feel less like strangers.)
2) I haven’t gotten lost going to the grocery store in like two whole days. That’s good, I think.
Oh crap. Is that the garbage truck? I thought it came on Thursdays! Feeling new again. Gotta go make the curb run of shame.
* I finally figured out why Virginia does the weird thing with cities that aren’t inside counties and counties that have areas that you’d think are towns, but they’re not. According to James, it’s vastly more efficient. No paying double taxes for city and county. And duplication of services like police and garbage are reduced. Now I wonder why every state doesn’t do that and I’m a little resentful of paying Dublin city taxes and Laurens County taxes. 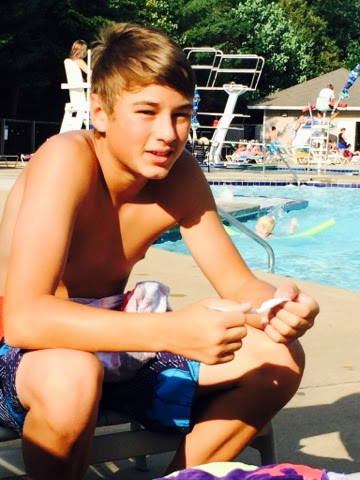 That’s Andrew at our neighborhood pool 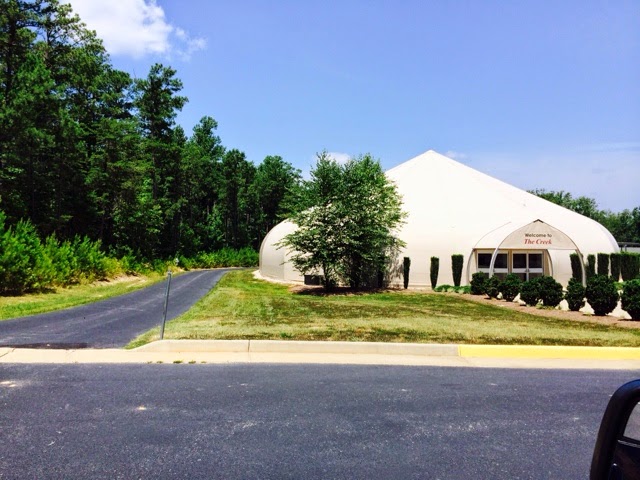 We were going to visit Swift Creek Baptist Church, but it looks like a huge garlic or a meringue cookie, which wasn’t on our list of things we needed in a church.

ANDREW: “maybe they had termites really bad and it’s one of those tarp things they use to kill them.” 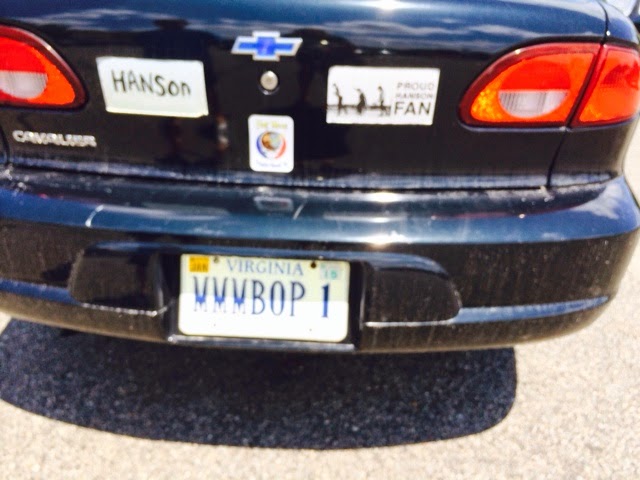 This was in the Target parking lot. Seriously? I hope it belongs to the Hanson kids’ mom.