Posted on July 20, 2014 by angelaweight
James, the boys, my stepdaughter, Sophia and I are at a Richmond Flying Squirrels game. I must’ve forgotten to take my Adderall because I keep forgetting there’s a game going on and that others are actually interested in watching it. 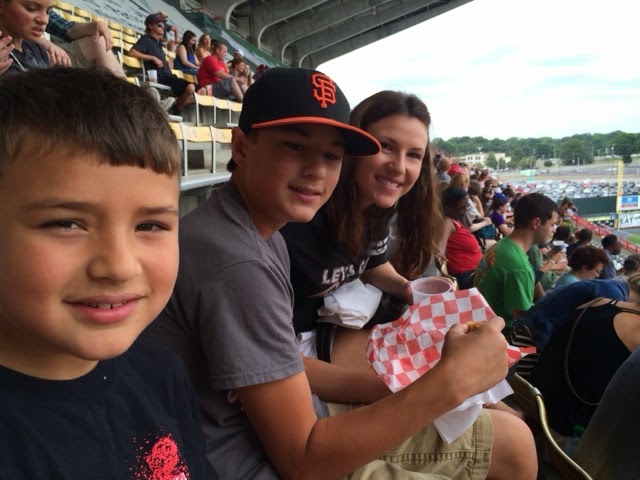 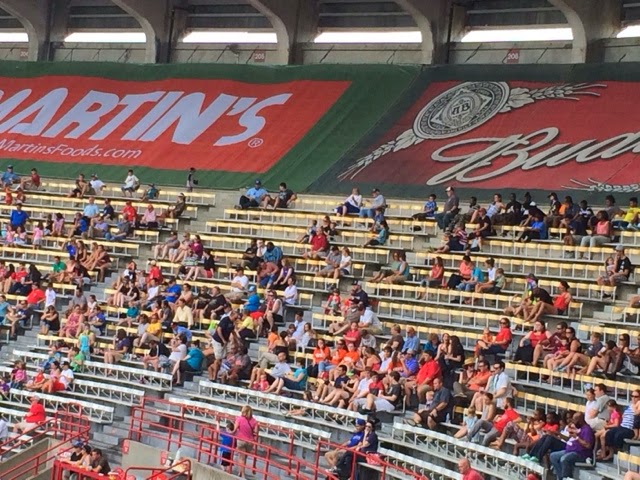 I like the fact that they painted the cheap seats gold and treat you special when you ask where the gold section is. Finally a place that rewards frugality.

This is a 30-foot inflatable of Nutzy, the mascot. It reminds me of the huge blow up animals you see on the roofs of some car dealerships. Does that really attract buyers, giving them a sense of confidence and trust in the dealer?

“Yes, Honey, a 10-year warranty and lifetime oil changes does sound great. And, yes, I did see that Hometown Ford and Fiat was awarded Business of the Year once again. But we agreed that the next car we bought would be from a dealership that has a huge blowup gorilla on the roof. It seems like you’d remember something that important!” 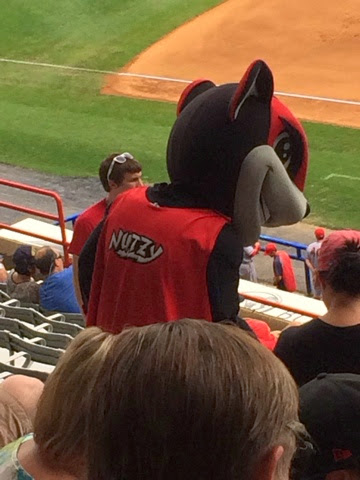 Nutzy is signing autographs a few rows below us. He looks like a villainous “bad guy” cartoon character. One that would hide lit sticks of dynamite in the other mascots’ lockers. Look at that con artist smile. I bet he takes pride in scaring more little kids than any other minor league mascot. Keep your wallets close, people.

So then I got bored and started taking selfies. I think I need Botox. 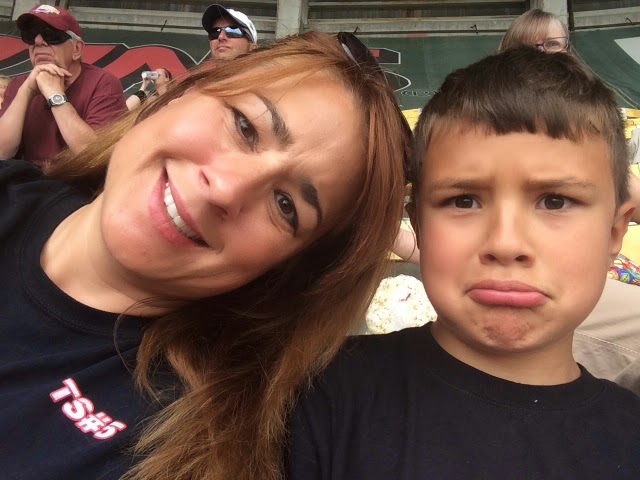 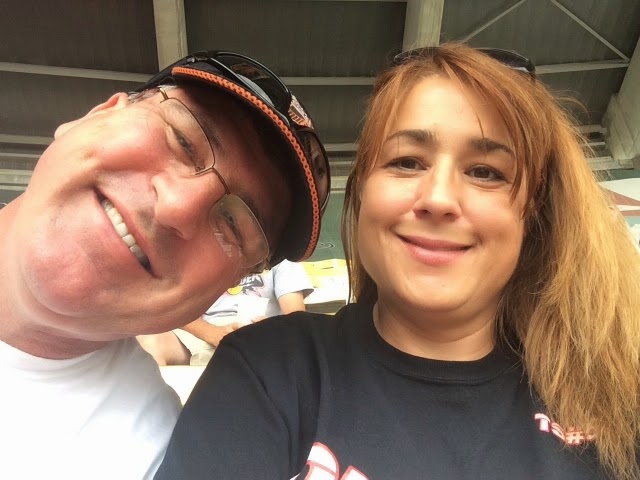 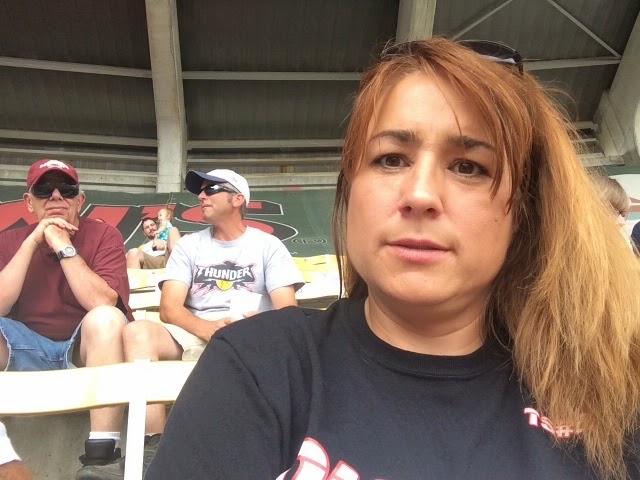 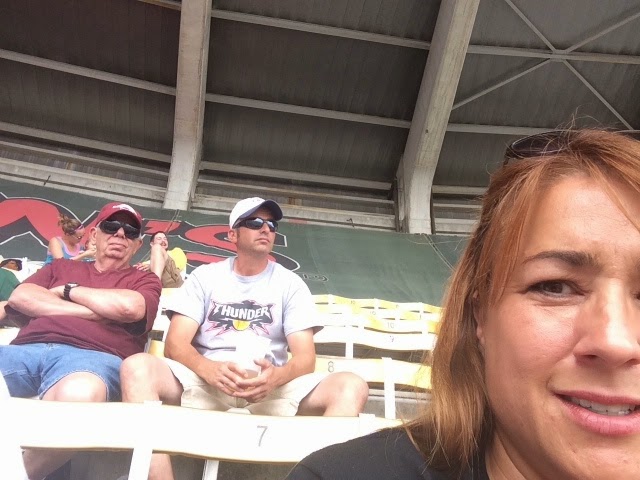 Those guys behind me are Phil and Rusty. This is their first outing together since Rusty was paroled. He served five years in an upstate facility for arson. I could be watching the game, but it’s more fun making up stories about Phil and Rusty. Maybe I’ll turn it into a book series some day. 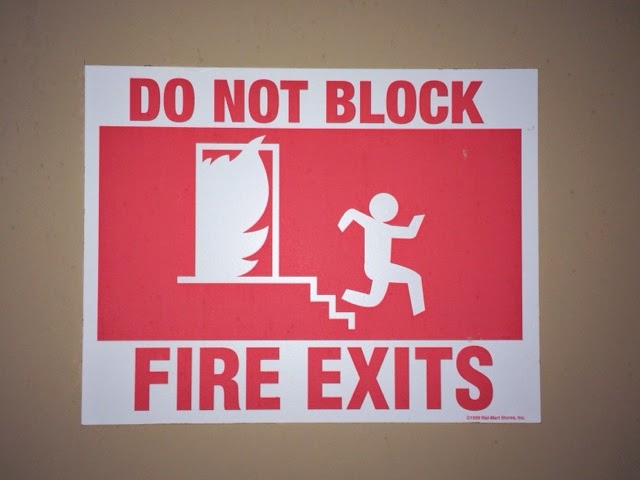 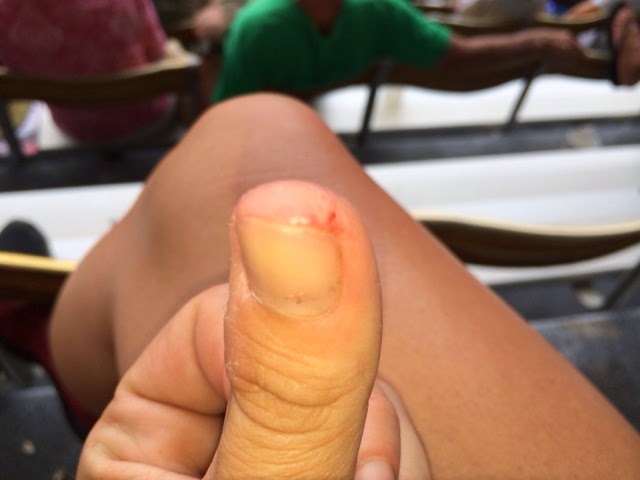 This is my thumb and the damage I’ve caused by biting it. I’m one of those compulsive people who bites and picks at things. I should probably take some medication that would reduce those picking and biting urges. But with my luck, the medication would have three dozen side effects including chronic diarrhea and uncontrollable rage. Why does my thumb look jaundiced in this photo? I should have that seen about. 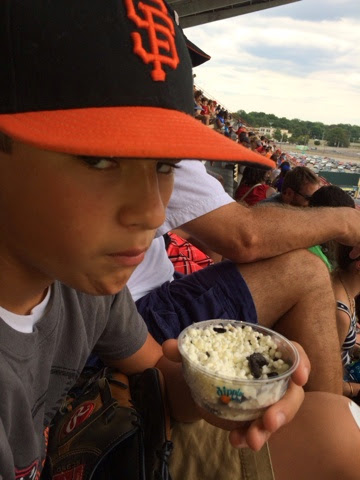 And now, Andrew won’t share his Dippin’ Dots with me. I wonder who invented Dippin’ Dots. And why? Were people getting bored with ice cream’s predictable smoothness and starting to crave the sensation of biting into a frozen beanbag? What’ll happen when people become bored with Dippin’ Dots? Then will someone invent Dippin’ Darts? Dippin’ Shards-O-Glass?

It’s now the bottom of the tenth. They must be tied up or something. Every time I tell myself I’m really going to focus on the game, some unrelated distraction highjacks my attention.
An inning ago, I was trying my hardest to pay attention. There were two outs and the bases were loaded. That’s when I noticed Sophia’s fuschia toenails, which made me think of my senior prom dress and getting the shoes dyed to match at Colleen’s bridal store. And wasn’t that the place that burned down a few years ago? And do high school girls still dye their shoes to match their prom dresses?
I guess I was still staring at Sophia’s big toe when someone (I’m assuming it was a player) hit a grand slam and then everyone started screaming and jumping up and down. This is the story of my life with ADD.
“Hey, Angela! That was an amazing catch Andrew made.”
ME: “When?
“Just then!”
ME: “oh THAT catch.”
“You did see it, didn’t you?”
ME: “I’m picturing it right now.”