What My Husband and I Fight About Most, a cautionary tale

Hi Everyone, Since, WordPress is apparently where all the cool blogger kids hang out, I’m slowly transferring posts from my other blog, sanitywaitingtohappen.blogspot.com. It might appear that I don’t know what I’m doing.

James and I had the fight again last night. It’s a bimonthly ritual where he uses his firmest voice to tell me to keep the @&)”&)&’ing animals off the bed while he’s trying to sleep. And I react by sobbing and asking why he bothered to marry me if he never loved me in the first place.

And then he mutters something under his breath, which is my cue to give an Oscar winning performance of hustling the dogs and cats off to sub-zero Siberia (or our very comfortable back deck.)
James and I have a lot in common. We’re both right handed and born in North America during the 20th Century to Homo Sapien parents. Oh, and we both speak English and require food, water and shelter to survive. We’re practically twins.

In spite of our many similarities, we were raised by parents who held radically differing views where pets were concerned.
I thought everybody grew up in families where animals were treated like royalty. Families that showed up at the Sears Portait Studio with two Springer Spaniels, four coon hounds and a narcissistic house cat…(if he was cooperative. If he wasn’t, we’d have to reschedule the whole thing.)
During many a supper time, my mom would scold me for reaching for a second drumstick. “Angela, you know that one is Scamp’s!”

It should’ve been a red flag on our first date when James told me his childhood pet was a goldfish…that lived outside because animals weren’t allowed in the house. I should’ve realized he wasn’t a man who would appreciate getting kicked in the face at 2 a.m. by a gassy, 70 pound retriever having a nightmare.

And so, after nearly 15 years of marriage, my lack of discipline where animals are concerned has caused more fights than anything else.

Its not big issues like finances and religion, but the subtle, trivial pet peeves, like dog fur on the furniture, that cause husbands and wives to regularly fantasize about killing and dismembering each other.

To help people avoid their own relationship pitfalls, I’ve created a list of vital discussion questions derived from domestic violence incidents minor challenges that James and I have faced over the years. 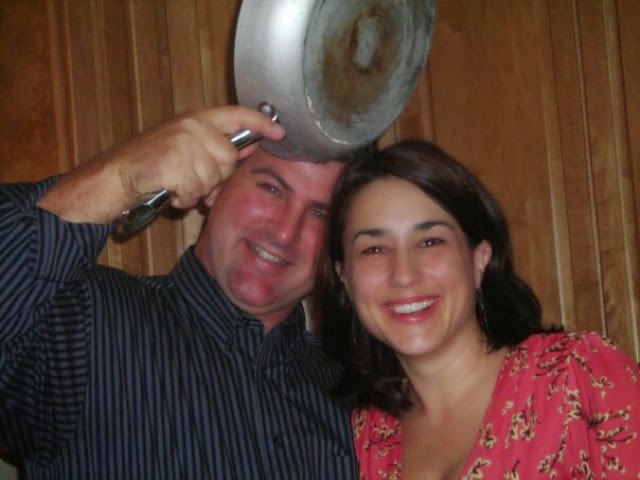 If you’re engaged or dating someone, then please go over this list with them. It might be the most important thing you ever do.
1) How many of your exes do you refer to as “psycho?”
2) When riding in the car, do you insist that the windows be rolled up if the AC is on?
3) If I notice that you have a stray eyebrow hair the length and texture of a piano wire, would you get mad if I try to pluck it? Even if you’re asleep?
4) What are your core values regarding the use of bleach when doing laundry?
5) How often do you help yourself to few bucks when passing the church collection plate?
6) Is the phrase “does this make me look fat” a sincere question or an IQ test?
7) If you were to enjoy a bowl of ice cream in bed, would I find the bowl the next morning in the dishwasher? Or six years later when we replace our mattress and box springs?
8) How would you feel about living in a super nice house that you got a great deal on….because a double homicide was committed there?
9) How often do you miss the toilet?
10) How do you feel about drinking directly from the milk carton?
11) When a stranger asks you driving directions, do you leave out a turn or two just for fun?
12) What’s your philosophy on spit cups in the bedroom?
13) At what point are leftovers too old to serve your parents for Sunday dinner?
14) Which Star Wars character do you relate to most and why?
15) Have you or would you ever wear an Under Armour compression shirt with cargo pants?

16) On sandwiches, do you prefer mayonnaise or Miracle Whip?

17) How do you feel about the show Family Guy?
18) How often do you willingly engage in the act of  replacing a used up toilet paper roll?
19) In baseball, the score is measured in runs or points? (If your significant other says points, then that’s your cue to end the relationship immediately.)
That’s all for now. As I think of more questions, I’ll be sure to add them. In the meantime, go pick a fight with your significant other about something new and different.