(If you’re easily offended and/or Canadian, please read with caution.)

The other day, my friend Jennifer posted on Facebook that she was looking for advice on products to remove (or at least hide) the dark circles under her eyes. I, too, suffer from this unfortunate, age-related affliction.

(My under-eye bags can get so large and dark that it looks like I’ve stuffed them with yard clippings. Like Jennifer, I’m searching for a treatment that works and costs less than a new set of breasts.)

In response to Jenn’s question, someone posted a video of a woman named Bekki (with two k’s, like she’s got something against c’s), from British Columbia demonstrating a miracle product called Instantly Ageless. I was super excited to watch it and discover that Canadians also suffer from baggy eyes.

The stuff seemed to work magic. No camera tricks. No edited before and after photos. Bekki rubbed the mucus-like fluid under her eyes and then engaged her viewers in awkward, unrehearsed small talk. The camera was on her the whole time. And amazingly enough….her dark eye bags vanished within a couple of minutes.

(Here’s the video of Bekki. She keeps saying how much “fun” it is to use this product. Maybe she was just released from captivity or something.)

I immediately Googled Instantly Ageless and found it on Amazon.com. The dozens of reviews were less than glowing, which led me to think that in all her “fun,” Bekki had neglected to tell us a few things.

One reviewer wrote,”You can do the same thing with egg whites.”

“Seriously? egg whites?” What made someone choose to rub egg whites on their face to see if it would cause them to look younger? Or did they just happen to have egg whites on their face for some other reason and suddenly realized that their eye bags were gone? Perhaps there was a meringue making disaster involving an out-of-control Kitchen Aid mixer. Can you imagine that conversation? 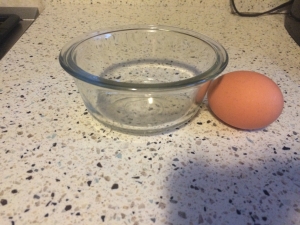 I’d just bought a dozen eggs and was more than willing to sacrifice one in the name of science and inexpensive eye bag removal.

Above is my before photo. I’m wearing no makeup (and clearly have no shame.) Notice the bag, half-circle crease under my left eye, but it’s on the right because you’re facing me. It’s always more noticeable than the other one, as if my left eye has had a tougher life than my right one.

(I didn’t take any photos while applying this to my face. Just picture it in your head, if you can.)

This is about five minutes after smearing egg white under my eyes. Holy Crap! It’s working! I can definitely tell a difference! Grab an egg and try it yourself if you don’t believe me!

UNBELIEVABLE!!!! Ten minutes later. The bag is gone. This is insane!!!!

It’s also starting to dry and feels sort of crusty. How will I apply foundation over this? And what if it starts to flake off, like some strange, random patch of facial dandruff?

With my new found youth, I decided to take the dogs for a walk.

We’re back! CRAP!!! The bag is back too! Seriously? And now I need Botox between my eyebrows too.

So, I guess egg whites do work to remove eye bags. But you have to reapply it every hour, which means I’d have to start carrying eggs with me whenever I leave the house. And where would I store them? Can’t just toss them in my purse with my lipstick, unless I kept them in the egg carton. I’d need a refrigerated purse and I don’t think they’ve been invented yet.

Of course, freshly laid eggs don’t need refrigeration. But then I’d have to buy my own laying hens…and build a hen house. And how would I explain that to people? “Yeah, I raise chickens in order to look younger.”

I could start selling the eggs as specially formulated “youth renewal” eggs. Maybe Instantly Ageless is nothing more than egg whites in fancy packaging. Leave it to Canadians to come up with such brilliance.

Like Loading...
This entry was posted in Uncategorized and tagged Bekki from British Columbia, Egg whites to remove eye bags, how to remove dark circles under eyes, insecurity, Instantly Ageless, satire, Woodlake. Bookmark the permalink.

20 Responses to Instantly Ageless? Do Egg Whites Remove Under-Eye Bags? My Own Experiment (with unflattering selfies)